In Dillsburg, Pennsylvania, 11-year-old Liberty Miller declined all birthday presents and instead asked for the cash value; just so she could donate to the recovery expenses of a tiny puppy mill Boston terrier survivor named Libre, reports WjlaNews. 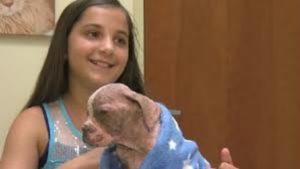 And when Liberty brought the $250 to the Dillsburg Veterinary Center, veterinarian Dr. Ivan Pryor was overwhelmed and extremely impressed:

“I didn’t know Liberty before this, but I’m just really proud of her,” Dr. Pryor stated.

Liberty did get to meet Libre and softly cuddled him in her arms.

“I feel happy. Very, very, very happy. He needed a lot of help and I knew it would help him a lot,” Liberty said. 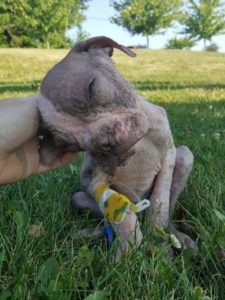 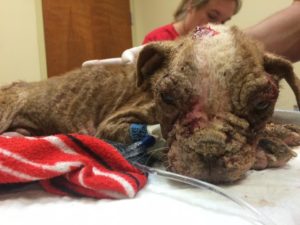 The Lancaster County SPCA’s director Susan Martin stated it could not be proven beyond a reasonable doubt that the breeder neglected care or  intentionally set out to harm the pup born on the farm; therefore no charges of animal neglect or cruelty have been filed. Angry advocates have  asked for Martin’s resignation.

According to a statement sent to the Pet Rescue Report from Kristen Tullo, Pennsylvania state director for The Humane Society of the United States, the following helps to explain the tragic situation:

“The case of Libre is one of many in a string of high profile cases that highlights the urgent need for the Pennsylvania legislature to take animal cruelty seriously by passing tougher laws. While we are not a law enforcement agency, and as such we do not have jurisdiction over cases like this, we are working with community groups to turn this tragedy into positive action. We can do this by improving legislation to crack down on puppy mills so this doesn’t happen to dogs in the future.

There are two specific bills pending in our legislature that would help puppies like Libre. One is SB 22, the “Puppy Lemon Law,” which would grant consumer protection to people who purchase a sick puppy. It would hold all breeders accountable, not just those with kennel licenses, for selling sick puppies. The second is HB 492, which would require more information to be shown regarding dogs in pet shops.

We need to hold pet breeders responsible for their actions. The Humane Society of the United States urges everyone who cares about the fate of Libre to contact their state legislators asking for their help to strengthen Pennsylvania’s cruelty laws.”

Donations to Libre’s medical account can be made by calling the Dillsburg Veterinary Center’s office at 717-432-7031. What a young hero Liberty is for those who cannot speak.